TV Series Being Developed About LA’s Growing Passion For Tripping

High CBG Strains and Why You Want Them

Top Ancillary Marijuana Stocks To Buy Before April? 3 To Add To Your List Right Now

Tilray Is Creeping Into the U.S., But Its Sales Goal May Lead to Dilution

5 Questions Budtenders Get Asked the Most — Plus Some Answers

West Hollywood, now dubbed the Emerald Village to lure more cannabis tourism, is currently home to one operating cannabis consumption lounge, with more than a dozen on the way. One of those coming soon is at The Woods Weho, a dispensary backed by Woody Harrelson and Bill Maher that opened last weekend.

Harrelson, sided by the mayor of West Hollywood and the head of the city’s chamber of commerce, proudly cut the ribbon at his new business venture. “Hopefully we’ve added more beauty and more good times here. Hopefully, we can make the West Hollywood Citizens a little bit higher,” Harrelson told the crowd. “It’s the greatest day that I’ve had in a long time.”

RELATED: How This California City Plans to Become the ‘Amsterdam of the Far West’

He said he fell in love with the building, a former designer’s studio with beamed-ceilings, dangling lights, and beautiful arched display cases, both for its location and garden in the back. The garden, complete with koi pond, is where customers will be able to light up once it opens. For now, the dispensary carries a variety of cannabis brands but emphasizes organic, sun-grown strains from California — his personal favorite. 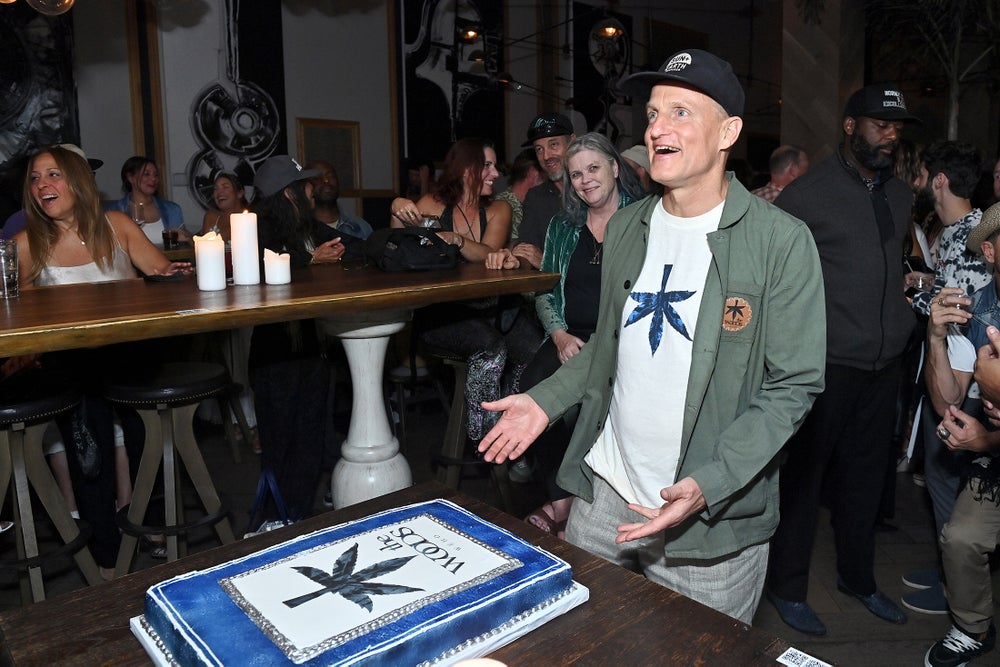 “I very much believe in sun-grown,” the actor and cannabis activist told The Hollywood Reporter. “The war on drugs pushed [growers] indoors and you know, that’s fine. I call it chem weed and it also spawned the use of a great deal of fertilizers and artificial lights and so forth. And I just feel like we don’t need that anymore. We won the war on drugs here in California for this plant. Let’s bring it outdoors where it belongs. It really wants to be outside or at least in a greenhouse, but let it get real sun. Definitely, the quality is so much better.”

The Emerald Village is growing

Nearby, The Artist Tree dispensary opened the Studio Cannabis Lounge, a split-level consumption area above the retail and art gallery space. Debuting on 420 (of course), it offers a curated menu of edibles and single-serving pre-rolls, flower, and vapes. There are tableside servers, indoor and outdoor seating, non-smoking and smoking areas, and non-infused drink options. Food can be ordered via a partnership with neighboring Kitchen 24 to be delivered.

The Artist Trees’s consumption lounge is only the second to open in Southern California; the first was the Original Cannabis Cafe, which opened as a Lowell-branded cafe in 2019 but closed when the pandemic took hold. TheWoods is just the latest for West Hollywood, which is positioning itself as a magnet for weed businesses, and more important, consumers. It wants to be the ‘Amsterdam of the far West’, according to the Los Angeles Times. The city permitted up to 16 lounges in 2018, along with 10 dispensaries.

WeHo has always pushed the boundaries of fun, from speakeasies during Prohibition to the rock clubs of the 1960s, the Sunset Strip, plus the excess and debauchery during Pride week and Halloween. It’s where Los Angeles goes to party. Opening the floodgates for cannabis businesses and those drawn to them will be a big win for the city of 35,000.

Next Now That Magic Mushrooms Are Mainstream, Are They Addictive?

Top Marijuana Stocks To Know About Before The New Week Begins

3 Marijuana Penny Stocks For Your Watchlist In 2022

Marijuana Stocks To Watch At The Close Of The Month

2 Marijuana Stocks To Watch Right Now In 2022 Marijuana stocks are still feeling the impact of a down market. This can be attributed to several factors. For starters, the cannabis sector is already a volatile place on its own. What this means is things can change without warning. Meaning at any momentum a marijuana …

The Best Marijuana Stocks To Buy The First Week Of June?

Top Marijuana Stocks To Watch As New Month Of Trading Begins At the moment marijuana stocks are still in a volatile place. Over the last several weeks many cannabis stocks have quickly risen and fallen. Yet this is not all bad if you are able to play the short game better than others. What this …

What Is It Good For?

In An Age of Legalization, the Maine “Pot Conspiracy” Is Worth Noting

Opinions expressed by Entrepreneur contributors are their own. The recent “pot conspiracy” in Maine makes for some interesting reading. It also provides a stark reminder to legitimate cannabis entrepreneurs that the illegal cannabis market still remains an issue — especially when local law enforcement, state prosecutors and elected officials use it to line their own pockets. …