Medical Marijuana And Aphasia — Here’s What We Know

Bees That Eat Hemp Don’t Age As Quickly, and What That Means For Humans

NYC Authorities Tow a Bunch of Weed Trucks, But Not For Selling Weed

The drama surrounding the women’s figure skating competition at the Winter Olympics ended with Kamila Valieva, a highly touted Russian skater accused of doping, falling during her final performance and not winning a medal.

But given what happened in the 2020 Summer Olympics to American Sha’Carri Richardson, who was banned from competing after testing positive for cannabis use, questions linger about why the International Olympics Committee (IOC) even allowed Valieva to take the ice.

Everyone has an opinion. The Russian team maintains that Valieva was “clean.” The IOC said they did not want to cause “irreparable damage” to the 15-year-old skater by banning her from the competition, but that argument never arose in the 21-year-old Richardson’s case. The sprinter believes racial bias informed the decision. 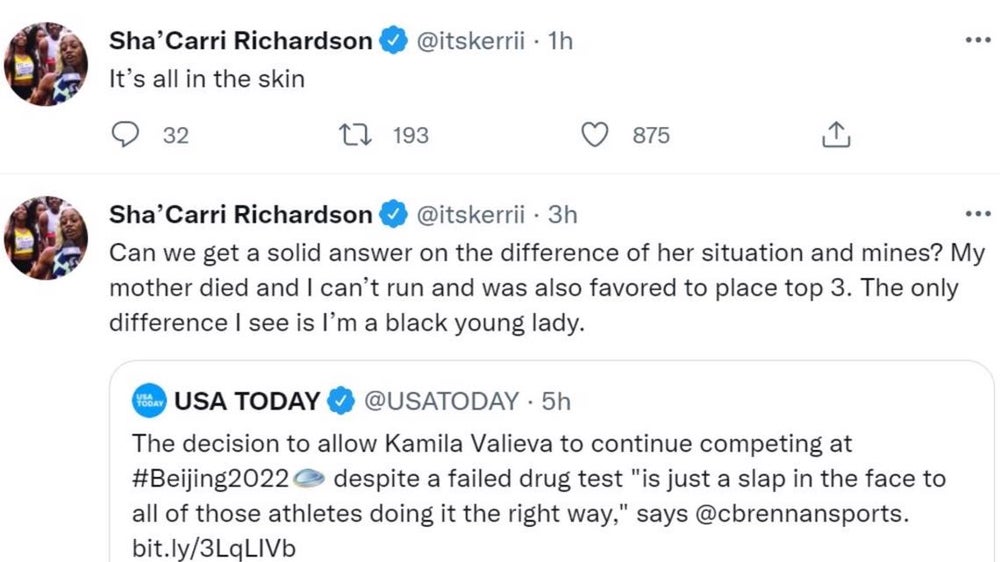 What’s certain is that no one blames Valieva, who was devastated after falling in her final skate and failing to earn a medal. Instead, the focus is mostly on the differences between how the U.S. and Russia handled the two cases.

Related: Is Cannabis a Performance-Enhancing Drug?

What happened with Richardson

Richardson tested positive for cannabis after the U.S. qualifiers before the Olympics in the summer of 2021. Since cannabis is on the World Anti-Doping Agency’s list of banned substances, the U.S. Olympic Committee required Richardson to serve a 30-day probation period, which kept her out of the Olympics. She voluntarily accepted her penalty.

But the case led to widespread complaints from athletes and even medical professionals about the validity of suspending an athlete for cannabis use. There’s no science that indicates using cannabis helped Richardson run faster. She said she used cannabis because her mom had died and cannabis helped her deal with the grief.

The outcry over her suspension led the WADA to announce it will reconsider its policy on weed.

What happened with Valieva

In Valieva’s case, a drug test found the presence of trimetazidine. The heart drug is “believed to be able to boost athletes’ endurance and blood efficiency, meaning it can boost athletic performance, while THC does not, according to NPR.

The test happened in December. But while Richardson’s test result became known swiftly in the U.S., the Russian skater’s drug test results remained publicly unknown until after she had already started competing in the Winter Olympics in China.

“Russian doping authorities, not the more harsh United States ones, were responsible for Valieva’s punishment, or lack thereof,” Jay Busbee wrote for Yahoo! Sports. “Delays in processing and notification from Russia’s anti-doping agency kept the positive test from airing until Valieva had already competed in her first event in the Games, more than a month after the sample was taken.”

Had Russian authorities moved as swiftly as their U.S. counterparts, Valiena may have never gotten on a plane to Beijing, he wrote.

Still, many people question why the IOC did not act on its own against the skater. They also question the fairness of Valieva benefiting from Russia moving slowly with its drug tests while Richardson paid a steep price for the more efficient system in the U.S.

Related: What Sha’Carri Richardson Taught Us About Cannabis and Being Human

For her part, Richardson focused on issues beyond the differences in how the two countries managed the drug tests. She voiced what she saw as a double standard tweeting, “the only difference I see is I’m a young black lady”.

The Dallas Morning News agreed, writing, “Our hometown track star, Sha’Carri Richardson, is speaking an important truth loudly, and we don’t blame her.” They noted Russia isn’t allowed to have skaters at the Olympics after getting caught in a state-sponsored doping scheme at the Sochi Olympics in 2014. The current team competes as the Russian Olympic Committee team.

The New York Times reported that Adam Rippon, a 2018 Olympic medalist who coaches the American figure skater Mariah Bell, questioned the message being sent when a young white athlete is allowed to compete after testing positive, but not a young Black athlete.

He added: “I also think that there’s actual accountability in the United States compared to what happens in other countries. There’s no doubt about that.”

2 Marijuana Stocks To Buy In The Stock Market Today?

Best Marijuana Penny Stocks To Buy Before 2022? 2 To Watch As The The Year Ends

Thailand Could Lead the Way for International Strain Registration

Thailand was not always a progressive place for cannabis policy. However, it has certainly made up for lost time. VasilevKirill | Getty Images It was the first country in its entire region to legalize cannabis for medical use, with Thailand’s medical cannabis model including a provision for all households to cultivate cannabis and sell it. Thailand’s government …

Best Ancillary Cannabis Stocks To Buy? 2 Pot Stocks For Your Watchlist In December

Investing In The Cannabis Market In 2022 As the market begins to rally are you looking for top marijuana stocks to invest in for 2022? This year the cannabis sector rallied in the first quarter because investors believed federal cannabis reform would be reached in 2021. Now as we close out the year most top …

Opinions expressed by Entrepreneur contributors are their own. A new national survey from market research company SSRS has confirmed what many already know – American support for marijuana legalization is growing as we speak. Shutterstock A plethora of polls demonstrates growing support for cannabis across the U.S. with some looking at additional notable information, such as comparing the preference for weed to alcohol. …

Best Cannabis Stocks To Watch With Current Market Volatility As the possibility of another round of bills that may produce federal cannabis reform in 2022 begin top marijuana stocks to buy are experiencing extreme volatility. In January most of the best cannabis stocks declined to establish new 52-week lows to start the year. Now with …

Opinions expressed by Entrepreneur contributors are their own. The National Basketball Association Players Association (NBPA) recently announced they’ve taken a step beyond simply endorsing the use of CBD for health and wellness. The organization has partnered with Re+Play, a company owned by former NBA player Al Harrington, to promote his CBD products. The new partnership …

Cannabis Addiction: Can You Actually Get Hooked?